The challenge of Thermal Runaway Detection in Lithium Ion Batteries

While generally an uncommon event, stressed lithium-ion (Li-ion) batteries can undergo failure through a variety of causal factors. This failure can result in an internal reaction that generates heat and chemical decomposition of the battery cell. When this occurs, the cell may vent flammable gases. Under certain conditions, these gases can ignite and spread to other cells within the battery pack, causing a battery thermal event known as thermal runaway. 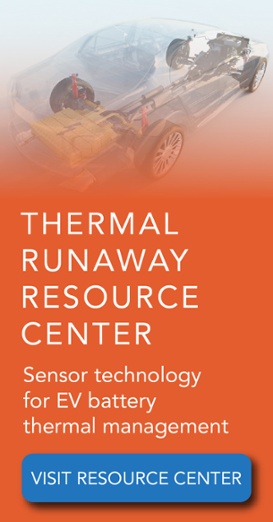 The best means of thermal runaway prevention is to stop the battery thermal event from taking hold inside the battery pack.

Within seconds of initial cell vent, REDTR sensor technology identifies and qualifies whether the battery thermal event is contained or cascading to adjacent cells by monitoring various physical aspects of the cell ejecta plume within the enclosure. This quick detection provides the Battery Management System (BMS) the opportunity to engage timely countermeasures to protect the occupants.

Take This Page With You!

Fill out the form below to download a PDF of this product's information: